If you are a true lover of Iberico ham and you know how to make sure you don't get screwed when it comes to quality, you are in the right place. We are experts in the commercialization of Iberian hams and shoulders. The Iberian pig from which these products come is only found in the Iberian Peninsula. In Spain, four areas are producers with Protected Designation of Origin (PDO): Jabugo (Huelva), Dehesa de Extremadura (Extremadura), Guijuelo (Salamanca) and Los Pedroches (Córdoba). The DOP distinctive refers to a product originating in a certain place, region or country.

When it comes to buy Spanish ham there are several options, all of very high quality. They differ according to the breed of the animal and its diet. Depending on the breed of the pig, the ham can be 100% Iberian or crossed. In this second case, you have to specify the percentage of the Duroc breed, the most common. This is America's own breed. It is a cross between two pig breeds of European and African descent: Old Duroc and Red Jersey. Its meat is fatty. In addition to the breed of the pig, the product can be classified according to the diet the animal carries. According to this parameter, the ham can be acorn, field bait or bait. In the case of jamón ibérico de bellota, the meat is obtained from Iberian pigs raised in the wild in the pastures. In the last months of fattening they are given natural grasses and acorns. 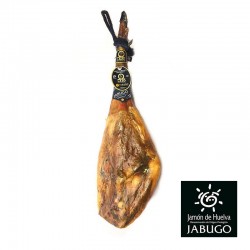 In the case of field bait ham, the animals are raised in the wild, but feeding at all times on natural pastures and feed. As for the bait ham, this pig does not live in freedom but on farms. It is fed with cereal and legume feed and for this reason this ham is less valued in the market. If you want to give yourself a real feast, bet on the acorn-fed Iberian ham from Lola Gourmet. We assure you that when you see the Pata Negra label you will always be in front of a 100% Iberian acorn-fed ham. Remember that a field bait or bait ham can never be a pata negra ham. The animals live in freedom in the pasture and eat everything, up to 10 kilos of acorns a day. This is accompanied by grasses or fruits.

At Lola Gourmet we take care that the curing time of Iberian hams is scrupulously respected. It ranges between 18 and 48 months. It all depends on the location or region, the climate and the drying room. Anyway, it is the ham master who has the last word and who decides when he is mature.